The following is a guest post by David Khourshid about how he managed to build a specificity calculator in Sass. In all honesty, I would not have made any better than David with this, so I have to say I am very glad to have him talking about his experiment here.

As any web developer who has to write CSS knows, specificity is both an important and confusing concept. You might be familiar with principles such as avoiding nesting and IDs to keep specificity low, but knowing exactly how specific your selectors are can provide you valuable insight for improving your stylesheets. Understanding specificity is especially important if you are culpable of sprinkling !important throughout your CSS rules in frustration, which ironically, makes specificity less important. 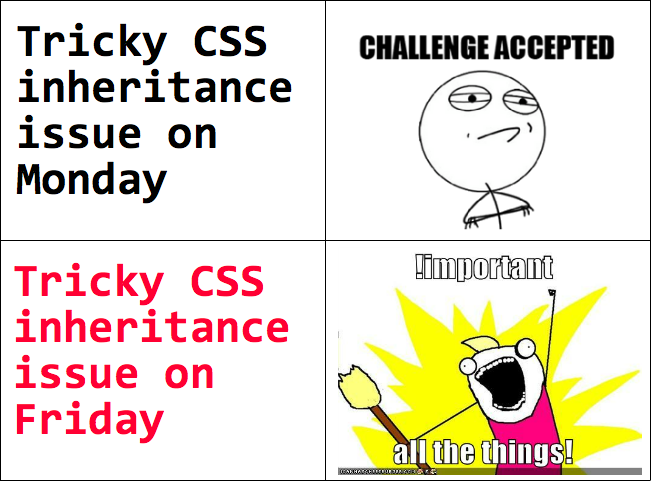 TL;DR: Check out the source (and examples) here on SassMeister or directly on GitHub.

In short, specificity determines how specific a selector is. This might sound like a tautology, but the concept is simple: rules contained in a more specific selector will have greater weight over rules contained in a less specific selector. This plays a role in the cascading part of CSS, and ultimately determines which style rule (the one with the greatest weight) will be applied to an element. Specifically, specificity of a selector is the collective multiplicity of its simple selector types.

There are plenty of articles that further explain/simplify specificity:

The Simplicity of Calculating Specificity

The algorithm for calculating the specificity of a selector is surprisingly simple. A simple selector can fall into three types:

Compound and complex selectors are composed of simple selectors. To calculate specificity, simply break apart your selector into simple selectors, and count the occurances of each type. For example:

…has 1 ID (type A) selector, 2 class + 1 attribute + 1 pseudo-class (type B) selector, and 3 element type (type C) selectors, giving it a specificity of 1, 4, 3. We’ll talk about how we can represent this accurately as an integer value later.

Now that we have our basic algorithm, let’s dive right in to calculating specificity with Sass. In Sass 3.4 (Selective Steve), one of the major new features was the addition of many useful selector functions that might have seemed pretty useless…

…until now. (Okay, I’m sure people have found perfectly good uses for them, but still.)

First things first, let’s determine what our API is going to look like. The simpler, the better. I want two things:

Consider a simple selector. In order to implement the algorithm described above, we need to know what type the simple selector is - A, B, or C. Let’s represent this as a map of what each type begins with (I call these type tokens):

You’ll notice that the map is in reverse order, and that’s because of our irritable colon (:) - both pseudo-elements and pseudo-classes start with one. The less general (pseudo-element) selectors are filtered out first so that they aren’t accidentally categorized as a type B selector.

Next, according to the W3C spec, :not() does not count towards specificity, but the simple selector inside the parentheses does count. We can grab that with some string manipulation:

Then, iterate through the $types map and see if the $simple-selector begins with any of the type tokens. If it does, return the type.

As a catch-all, if none of the type tokens matched, then the simple selector is either the universal selector (*) or an element type selector. Here’s the full function:

Fair warning, this section might get a bit mathematical. According to the W3C spec:

Concatenating the three numbers a-b-c (in a number system with a large base) gives the specificity.

Our goal is to represent the multiplicity of the three types (A, B, C) as a (base 10) integer from a larger (base ??) number. A common mistake is to use base 10, as this seems like the most straightforward approach. Consider a selector like:

This complex selector doesn’t look too ridiculous, but its type map is a: 0, b: 1, c: 10. If you multiply the types by 102, 101, and 100 respectively, and add them together, you get 20. This implies that the above selector has the same specificity as two classes.

We’re going to need a bigger base. 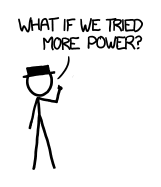 I chose base 256 (162) to represent two hexadecimal digits per type. This is historically how specificity was calculated, but also lets 256 classes override an ID. The larger you make the base, the more accurate your (relative) specificity will be.

Dealing with Complex and Compound Selectors

Thankfully, with Sass 3.4’s selector functions, we can split a selector list comprised of complex and compound selectors into simple selectors. We’re going to be using two of these functions:

Some points to note: I’m using a homemade str-replace-batch function to remove combinators, as these don’t count towards specificity:

And more importantly, I’m keeping a running total of the multiplicity of each simple selector using a map:

Then, I can just use my previously defined function selector-type to iterate through each simple selector ($part) and increment the $selector-specificity-map accordingly:

The Applicability of Specificity

So, aside from this being another application of a rethinking of Atwood’s Law, knowing exactly how specific your selectors are can be much more beneficial than seeing in your dev tools that your desired styles have been overridden by another style for some relatively unknown reason (which I’m sure is a common frustration). You can easily output specificity as a mixin:

On top of this, you can find some way to communicate the specificities of your selectors to the browser in development, and output a specificity graph to ensure that your CSS is well-organized.

You can take this even further and, if you have dynamic selectors in your SCSS, know ahead of time which one will have the highest specificity:

The full source for the specificity functions/mixins, as well as examples, are available here on SassMeister:

Play with this gist on SassMeister.

David Khourshid is a front-end web developer in Orlando, Florida. He is passionate about JavaScript, Sass, and cutting-edge front-end technologies. He is also a pianist and enjoys mathematics, and is constantly finding new ways to apply both math and music theory to web development.